The lost and lonely children of Tobasa, please help them achieve a brighter future through reading 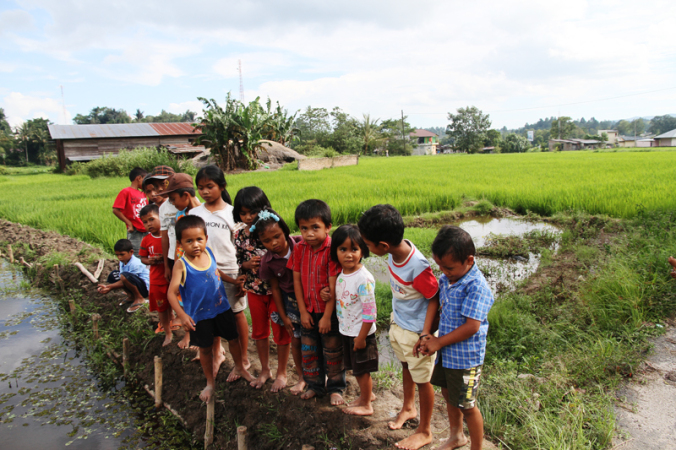 It was just after 1 pm, the sun was signing fiercely, I could hardly manage to see the outside of the house without my sunglasses.  A few distances away, I could see a few groups of young children coming towards the village, they were probably children aged between 6 – 12 years old.  They walked lazily under the sun using their ragged school bags to protect their heads from the fierce sun-ray.  As they drew near, I gave them a little wave and smiled at them. Some of them waved and smiled back, but a few looked a little shy and gave me a not so very confident grin instead.

Each of the children slowly disappearing into their own homes but not for long, after a fairly quick lunch and a change of outfit, they appeared back into the yard, looking a little lost. Some children gathering with other children, and a few shy children sitting around scratching the soil under their feet.  The fierce sun-ray was really not very inviting to play some physical games in the yard, so they just sit around with nothing to do.

After many days spending time at the centre in the village, the children got used to seeing me and they got a little braver to say hello.  In the mornings I would wake up early so that I would catch the sight of them going to school.  I would purposely collect some rubbish, mostly plastic wrappings from around the yards of the library and the banks of the little stream that running in front of the library, just to show them a little example that we all need to respect the environment.

After several encounters and chats with the children, they were now got very friendly with me and I was able to ask them many investigative questions about their activities at school and at home daily.  Sometimes, when the door of the library wasn’t open, they would knock on the window of my bedroom and wanted to see if I was in, and wanted to chat with me. After many days of spending time with the children, I told them that I live in London, UK.  One day one of the kids said “Bou, kapan kita bisa kursus bahasa Inggris sama bou” (means: Aunty, when can we have English lessons with you?). I smiled and said “we can do it now if you want” Then we placed a large mat on the veranda of the library and kids were sitting around as we started talking. I started demonstrating a little game with a song “Heads, shoulder, knees and toes, knees and toes…..two eyes….two years, a nose and a mouth, head shoulders, knees and toes, knees and toes” A song that I used to play with my son when he was only 2 years old.  The children just watched me, some of them looked very shy and hid their faces behind their more confident friends.  I knew they wouldn’t take in the song immediately, but at least they would want to sing it next time. Their visits to the library were more regular after this meeting.

Looking at these children, transported me back into my childhood. I was born and brought up till I was 12 years old, in a small village in Dairi region of North Sumatra, but my family later moved to the capital city of Indonesia, Jakarta where I continued my high school and university education there.  My childhood memories are crystal clear, remembering so many unstructured after-school activities. Basically, we had to create our own activities, nobody was in charge, nobody told us to read, nobody told us to play badminton, or to play hide and sick, nobody checks up on our homework, we were forced to be responsible for our own things. It was tough, but we didn’t think of it that way then, as there were no other alternatives. There were no libraries where we can borrow books or read. Even at school books were very scarce and no proper library there.

Then I was thinking of those great big homes in developed worlds, where books are plentiful and some of those books are probably being abandoned.  The arrival of e-book technology has made printed versions are less popular, and possibly huge numbers of these books are now neglected.

Wouldn’t it be fantastic if we could ship those unwanted books to the developing world, where children have nothing to read, nothing to do after school? Some very young children are being dragged to work in the fields with their parents, where they should really be studying and doing structured activities to develop themselves in our modern world?

Please help us to develop our libraries and provide opportunities for children to develop their ability to read and write and to use their after school hours more wisely and effectively. Your support, however small, could help them achieve a much brighter future.

We currently collecting books both in the UK and Indonesia, please donate your “redundant” books and help us succeed in our reading clubs & library network all over North Sumatra. Please contact us to see how you can help. Thank you.

Thanking you in advance for your support and for stopping by and share this story.

Their enthusiasm is on fire, but part of it is burning the future of Tobasa unintentionally
Kartini Day Celebration in our Toba Library – Celebrating Women Education in Indonesia

OUR UPDATES OVER THE YEARS

WE ARE PROUD OF OUR TEXTILE CULTURE